The fall in the books title is taken by 5 year old Finn from the balcony of the family home in New Zealand. We join his panic stricken mum Martha as she hopes he will survive his injuries. 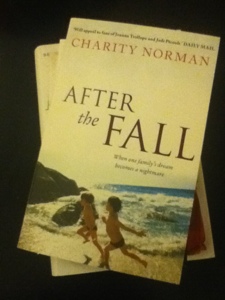 The title is slightly misleading as actually for the majority of the novel we join Martha as she reminisces about the year leading up to the accident.

We follow as, after facing struggles during the recession, the family decide to leave Britain for a new life in New Zealand. Marthas teenage daughter Sacha is less than happy about the move, but does join her Mum, Step-Dad and 5 year old twin brothers as they embark on a fresh start on the other side of the world.

To start with life in New Zealand seems idyllic, but as time goes on incidents start occurring that take the shine off, eventually leading to a startling and unhappy realisation. The novel encompasses emigration, addiction, family politics and raw emotion. Did Finn really sleepwalk off the balcony or has something more sinister occurred? Certainly the Children’s Department think they have reason to look into the accident further.

This is a novel that fans of Jodi Picoult and Diane Chamberlain will enjoy. It is a gripping read, I couldn’t put it down and had finished it in 48 hours. It is no literary great, but what it lacks in prose prowess it makes up for in sheer readability. There were a couple of plot lines that didn’t seem to be fully explored making them feel a little redundant, but overall my feeling on completion was one of enjoyment and satisfaction.