Yesterday morning I was cross within moments of being awake because Ian Smith (he can have the second i in his first name, and the right to use three names back when he stops being a twat) was being a Tory arse on the telly. I thought the day was a lost cause and it was barely past 7 am. But then a beautiful thing did happen. Lovely Billy Breakfast man told me David Bowie was not only having a birthday but that he also had a new song, and more new songs to come.

Ah deep joy. I have loved Mr Bowie ever since I first saw him on the 1973 Spiders From Mars tour. Admittedly I had what is known as a ‘restricted view’ what with being in utero at the time, but it was the start of a love affair I have never quite got over.

As a small girl my Dad sang me to sleep with ‘Starman’.

As a pubescent girl my sexuality was at least in part awakened by the gloriously tight trousered Labyrinth. I was absolutely astounded that she didn’t just let him keep the baby and join him in his Escher-esque castle! 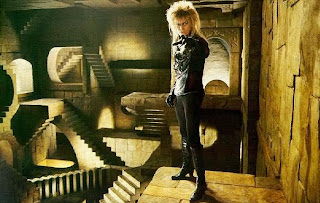 I have seen him live several times over the years, the last time being an outstanding Glastonbury appearance some dozen years ago.

I love him a bit. Well. Quite a lot really. One of me heroes. I look forward to the new album in March, and for now, here is the single in case you haven’t heard it….