I was asked a few months back to sit on the feminism discussion panel at BritMums Live. My immediate response was no. No, I cannot do that, I have never done any public speaking, let alone on such a divisive subject. Then I grabbed myself by the metaphorical bollocks   massive ovaries and thought, actually, I am going to say yes. I am 40 in a few short weeks, and I should stop letting fear make my choices and take a gamble.

This was all very well a couple of months in advance, but come the day I wanted to borrow the TARDIS, zip back and give my moderately younger self a stout slap about the face for landing me in such a terrifying position. 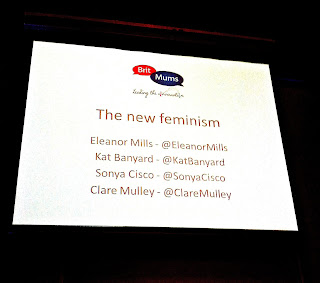 I was to share the panel with Eleanor Mills, associate editor of The Sunday Times- a successful journalist with a particular interest in women’s issues, Claire Mulley, a published biographer of historical feminist figures, and Kat Banyard- Director of UK Feminista. And me, blogger and opinionated witterer from a sofa in West Dorset. Not out of my depth at all then.
The panel started with each member taking a few minutes to introduce themselves and share their opening thoughts, beginning with Eleanor, who would also be our chair. They each spoke passionately, and with great informed intelligence, while I sat at the far end getting more and more anxious as to what on earth I could add when my turn came.
But actually I think (although you would have to ask those who witnessed it for confirmation) that I held my own. I may not have quite the handle on the specific language or nuances of feminist debate, but I think I managed to convey my points clearly.
My nerves mean I do not have perfect recollection of the discussion, but I share the points that stood out for me:-
Eleanor pointed out the lack of women in high powered, high paid roles within society, while I agree whole heartedly that this needs tackling, I added that I also felt it was important not to dismiss the role of those who choose to put their careers on the back burner to be stay at home mothers. We all agreed that freedom of choice is important, and that we should never invalidate another’s chosen path. In terms of improving representation in Parliament, Claire mentioned a brilliant idea she had heard via Tony Benn – that all constituencies should be represented by one man, and one woman – thus guaranteeing equal representation- a fabulous suggestion I thought.
We looked at feminism being more welcoming, discussing that it can be intimidating for people to state their opinions for fear of receiving a lashing from others. We discussed how important it is for women to be able to identify as feminist, that it should be welcoming for all.
I really loved fnding out more about UK Feminista, it is a very positive movement, focused on action rather than just discussion. Kat spoke eloquently on many aspects of the cause, particularly the need for us to be seen, for our objections to be noted and acted upon. We talked about the successes of campaigns such as ‘No More Page 3’  which while has not achieved its goal yet, has successfully galvanised women across society to take a stand.
Two panel members are themselves part of campaigns which deserve our support. UK Feminista are trying to get Lads Mags removed from the shelves of shops on the basis that exposing staff and customers to them may be in breach of the equality act. I would like to be shot of these magazines as they encourage sexist attitudes and for the effect they have on women’s body image.
Eleanor Mills has just launched a campaign in conjunction with the Sunday Times, to safeguard children from online pornography. Kids today have easy access to graphic pornography, it is colouring their view as to what normal sex and normal sexual behaviour is. For both boys and girls this is leading to unrealistic expectations. We need to try and find ways to stop them seeing it, and as parents we need to talk openly and without embarrassment to our children, to inform them about real sex, and real bodies. This kind of extreme porn can lead to rape and other darker forms of sexual behaviours being normalised. I do not want this for my children.
Overall the room as a whole agreed that all women, and men want equality- social, political, and economic equality. We agreed that positive action was a great thing. Contributing bloggers discussed their own experiences dealing with children and pornography, suggested campaigns to get childcare made tax deductible, and expressed their passion for feminism in various forms. Over on twitter people were agreeing with me that they are sometimes scared to put their feminist thoughts in writing for fear of being told off by other feminists – we must start to work together not against each other to achieve our aims, and am delighted that at least a couple have already been encouraged to put pen to paper, or at least hand to keyboard.
I loved the session, I came away feeling that there was a real passion among bloggers for the subject, and a renewed sense of purpose, a feeling of hope that if we all work together we can start to make some real progress.
What do you think?