Possibly as the results of a crazed scientist who has had too much coffee, the animals in the jungle have all got the wrong heads, and it is your toddlers job to sort out the mess!!

Using their newly discovered manual dexterity, they must manoeuvre the heads through the wiggly tracks until they sit on the right bodies again, then, and only then, can the jungle breathe a sigh of relief!

As usual for Bigjigs Toys, the Safari Maze Puzzle is a bright, colourful and well made toy, with lovely friendly looking, albeit headless animals! Syd has enjoyed playing with this puzzle, although I have to say he does sometimes find it frustrating as occasionally you get a jam, where heads can’t move past each other in the given space, meaning a re-shuffle is required. A reshuffle that requires the logic of an adult, as it sometimes needs a little thought to sort it out! Having said that, he is not put off playing with it, and has returned to it daily in the 2 weeks we have been playing with it.

From a parents perspective it is definitely a toy to play together, firstly so you can head off any frustrations before they become tantrums, and secondly because this sort of toy comes into it’s own when you work together. One of the best ways to build a child’s vocabulary is conversation, and this toy has lots to talk about. The animals and their colours, as well as spatial language (e.g. ‘Shall we try moving it up/down/left/right).

Overall it is a good toy, and Syd keeps requesting the Farm version which is pictured on the back of the box, so he obviously is enjoying the game! 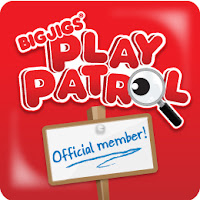 Disclosure: We were given this toy to review as part of Syds role as a Bigjigs Play Patrol Agent