I have had a busy month of reading, again mostly light weight-ish novels, I don’t seem to be able to get into anything more complex lately, I think fitting reading in round everything else makes it hard to get into a heavy book. Having said that I have thoroughly enjoyed each of these, and not everything you read has to be a Booker winner!

What would you do if you found an old letter from your partner marked ‘To be opened only in the event of my death’, especially if they are still alive. Would you read it? Would you be able to resist your own curiosity? Cecelia faces just this dilemma, and her curiosity is only invoked further when she sees how desperate her husband is for her not to look at the contents. I won’t divulge the secret contained within here, needless to say it opens a can of rather shocking worms, resulting in some tragic consequences. What if your perfect life is not all it seems? Could you live with it? A good family drama with overtones of thriller, and gives you something to think about.

Connie Bowskill thinks her husband has a secret life. She has been spying on him for months, and when the chance to use the Internet to look inside the what she believes is his other home comes up, she can’t resist. She does not expect to see a woman face down in a pool of blood in the middle of the lounge. Yet when her husband checks the screen moments later the body is gone. Has Connie lost her mind? Or is she witness to a very strange crime. This is a great thriller, a real page turner, with a disturbing outcome. A good read.

Twins Isolte and Viola path’s have diverged in adulthood. Isolte is a successful journalist, while her sister struggles with a lifelong eating disorder. This book sees them unravel the past, lost loves, and tragedies, to try and make sense of their present. An excellent psychological thriller, a complex story, with many revelations along the way. I loved the setting of their seemingly idyllic childhood, with their haphazard, hippy mother, and was gripped by the story as it unfolded.

Another book about sisters. When Katie’s sister Mia dies, apparently having killed herself in Bali, it shatters her structured life, and sets her on a journey to not only find out what really happened to her sister, but also one that sees her finding out more about herself. Following her sisters travel journal, Katie treks to the opposite side of the world looking for answers, and finds some she didn’t expect. Did Mia kill herself? And what secrets led to her death? Another addictive read.

A story of childhoods friends, who should have ended up more than that were it not for a series of bad timings. This book is written in the form of correspondence, mostly letters between the two main characters, Rosie and Alex, but also their families. I loved the quirky way it is written, allowing you to read from different characters perspectives. An ultimately romantic trip through two peoples lives, from childhood, right through to their 50s. A book for curling up with on a rainy day. 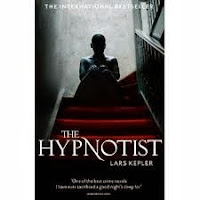 A Scandanavian crime novel, containing the usual level of gruesome murder and gore. I usually love dark books, but after the births of each of my children I have found I have had to step away from both horror and dark crime for a couple of years, as I cannot bear to consider the evils of the world. Now Syd is two I am ready to get stuck back into some blacker books, and this was a great one. Detective Joona Linna is investigating the brutal murder of 3 members of the same family. He brings in hypnotist Erik Bark, to try and get important information out the only survivor of the vicious crime, the families teenage son. When the boy admits he was the perpetrator, it triggers a series of terrifying events for the Bark family, and a man hunt by Linna. Totally gripping and compulsive, but not for the faint hearted!

The Last Letter From Your Lover – JoJo Moyes

Having enjoyed Me After You by this author last month, I was delighted to find this one in a charity shop. This books leaps from contemporary to the 1960s after Ellie discovers a set of passionate love letters. It is a beautifully, tragic love story that compares views on extra marital affairs across the decades. Is there ever justification for an affair? Is true love enough reason to break up a marriage, and how do you know your love is big enough to make it worthwhile? A beautifully romantic tale of love, bad timing, and the lost art of the love letter.

That is the lot for this month, not a bad tally at all, and sees my total for the year so far at 34. Can I read 16 books over the next 3 months, probably not, but I think I will get closer to the 50 books I challenged myself to read in a year than I expected, back in a few weeks with an update,