My 9 year old is absolutely games mad. He rarely thinks of anything else! Of course my job as parent is to spoil the fun by limiting the time he actually spends on consoles. But that doesn’t stop him- if he can’t play he will draw his own games, or watch others playing on YouTube walkthrough clips.

I have often wondered why there isn’t a better range of themed toys – well this year Meccano have come to my rescue and launched three ranges of toys to accompany games franchises- Gears of War, Sonic the Hedgehog and Rabbids. They have been kind enough to send us kits from the latter two to review. 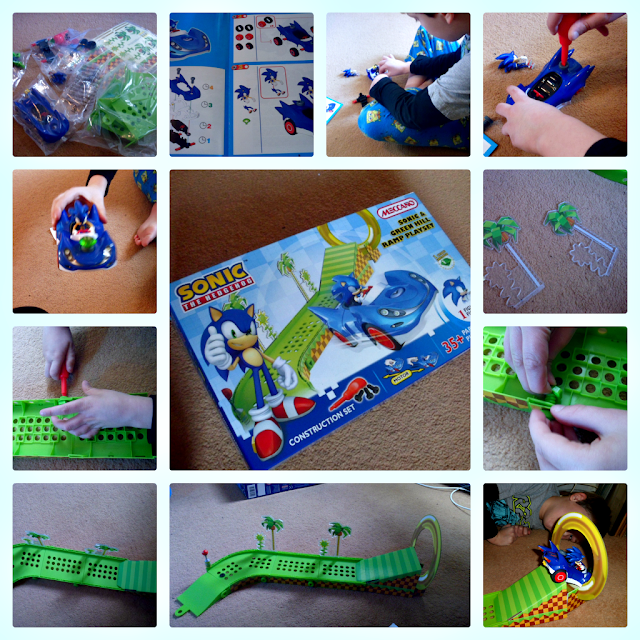 Today we started with the Sonic Green Hills Construction Kit. This is aimed at the 5+ age group. Taking it from the box it didn’t bear a lot of resemblance to the Meccano of my childhood- but it still involved enough construction to keep us stickering and building for almost an hour.

I think a 5 year old would need a lot of assistance- but Max could do most of it himself, with me mostly just holding things still while he got on with the techy business of building.

He soon got he hang of the nuts, bolts and screwdriver, and before long we had a finished item!

Now to test it…this is just a brief snippet….but you will get the gist!!

Ha! As you can see it is a little tricky to get it going round the track and through the loop- we did manage it- but not on camera!! But as you can also tell from all the giggling- a lot of fun was had watching the resulting mayhem when things didnt quite go to plan.

We really enjoyed the construction element, it was fab to spend some Mother/Son time working on a project away from the other kids. If pushed to find fault I would say it is slightly disappointing that there is no room to be creative yourself with the kit- once it is built that is it really! The resulting toy has already had a lot of use though, and will be a treasured addition to Max’s bits that he uses to make his own games levels that trail round the house.

He absolutely loves it- he liked the fact that the scenery is accurate to the game, including check points and palm trees. I asked him for marks out of ten. He scored it an 8 – only deducting points as it is hard to get it to perform its stunt.

The play set we tested is widely available and a quick google search finds it priced in the £22-£25 bracket and I think it is good value for money and a really great Christmas present for Sonic fans!

We spent all afternoon playing with Sonic so the equally awesome looking Rabbids kit will have to wait til another day, but look out for a review of that in the next few days!

Disclosure:- we were provided with the item free of charge for review purposes, all views expressed are genuine.