I have been to many, MANY festivals in my life, but until this weekend I had never been to Camp Bestival. This gem of a festival was started 6 years ago and with the specific aim of  giving the whole family a festival experience to enjoy. Many of my generation grew up going to lots of festivals, and we don’t want to stop because we have small people in tow, but we do want them to enjoy themselves, as well as being able to get into the festival vibe ourselves.

I have been to lots of festivals that are child friendly, or have kids areas, but nothing compared to this! It was an absolute joy to be at. The campsite was spacious, the festival is small enough that all the distances involved were easily navigable with pushchairs etc, and the entire thing seemed to invoke some kind of magic, with new delights to be discovered around each corner. 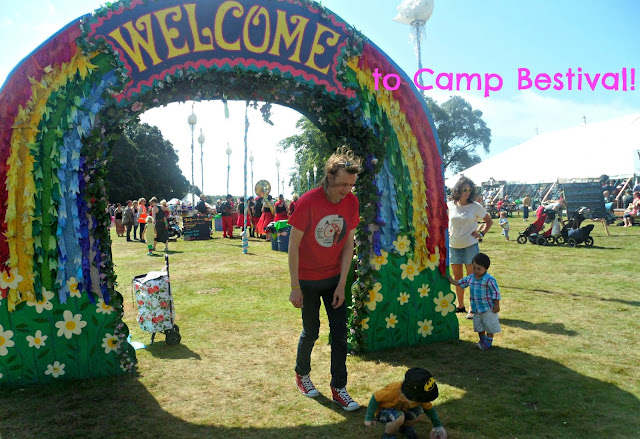 My teenager is a proper festival kid having been to countless over the years, and at almost 17 needs little supervision in an environment as safe and friendly as this. She brought her friend along, mostly they occupied themselves and we met up at the tent at the end of the evenings for a chat about our day over hot chocolate or milkshakes. There were a some current music acts for them to enjoy, and they happily pottered about wearing pyjamas and glowsticks in the evening. Onesies seemed to be the dress du jour for the youngsters! They had an absolute ball.

For Syd, who is almost 2, this was his first festival experience, and I can happily say he was in his element. There is SO much to do for small peeps, and we loved watching him have so much fun. There is a fabulous toddler area, with plenty of toys, balls, sandpits and tee-pees for playing with. We visited a few times over the weekend, and Syd could play there, shaded by camouflage nets, and we could relax and watch him. It was a spacious area, and at no point when we visited was it over crowded. 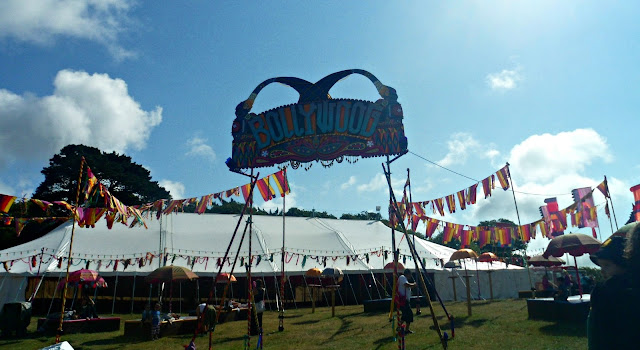 There was also an under 5’s soft play area in the Lower Kids Field. This may well have been mayhem in the day, but we visited Saturday evening in the last hour before it closed, and it wasn’t overcrowded at all. A huge marquee with ball pools, and big cars for driving, houses for playing home in, and a fab selection of soft blocks and mats. Also to be found in this field overlooking the sea was a huge boat shaped sand pit, a massive craft tent, a science tent, a Skylander and so much more. 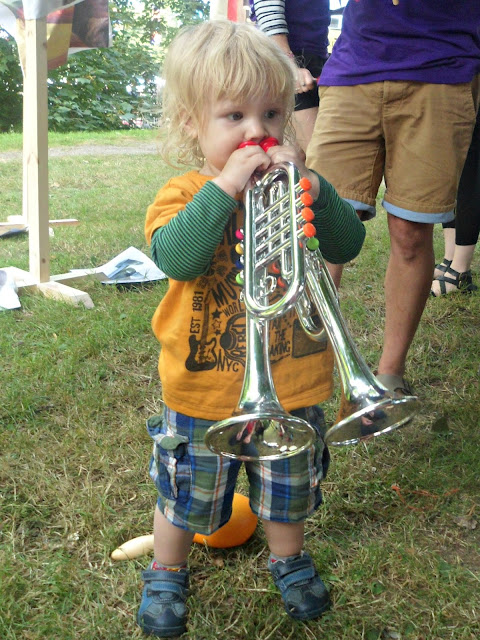 I also noticed a lovely baby chill out room, with arm chairs for feeding, and changing mats, and glorious shade and quiet from the mayhem- perfect for those with tiny peeps in tow- they really have considered every age of child. There is a vast array of things for all ages to enjoy, with plenty to occupy bigger kids too- circus skills, and science shows, and insect museums, and face painting, and craft, and, and, and, and…..

Even better still was the random things, the peculiar bit and bobs that let his imagination run free. Pianos are dotted around for anyone to play with, Tate Britain had a fab array of musical and percussive instruments to experiment with, the dingly dell was imbued with fairy dust, there were even elephants and cows to climb. Colourful flags caught his attention against brilliant blue skies. Swans lit up the night, rainbows could be walked through, and a strange steam punk train travelled a bridge to nowhere. Bubbles were abundant, and an array of colours lit our paths. I cannot convey on a page the magical feeling that exists in this festival, all in taking place in the grounds of the stunning Lulworth Castle. 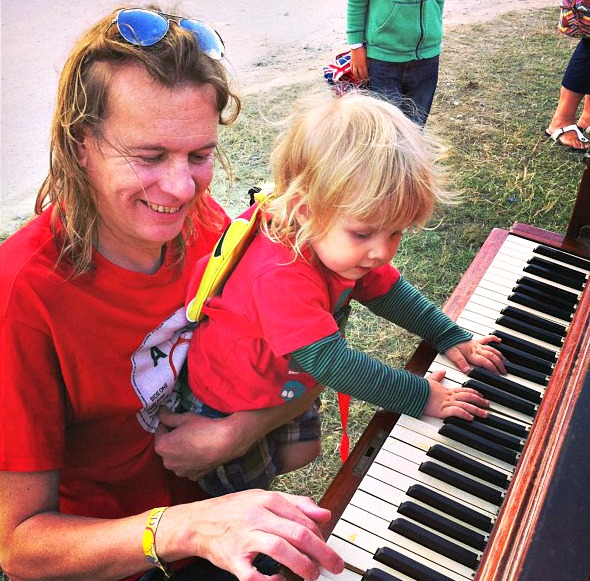 We took part in a Paper Aeroplane world record event, and sang-along to Jungle Book. We briefly saw Mr Tumble, but his popularity meant Syd couldn’t see much over the sea of kids on parents shoulders, so we ran away to roam freely in the kids fields instead.

There is a lot of positive charity work in evidence too, with informative stalls from major players such as Oxfam, charity campaigns given space on the big screen, and quirky fundraising activities like Schuh’s Welly Exchange, where you could swap old shoes for wellies, and they then use the old shoes for fundraising via reselling or recycling. 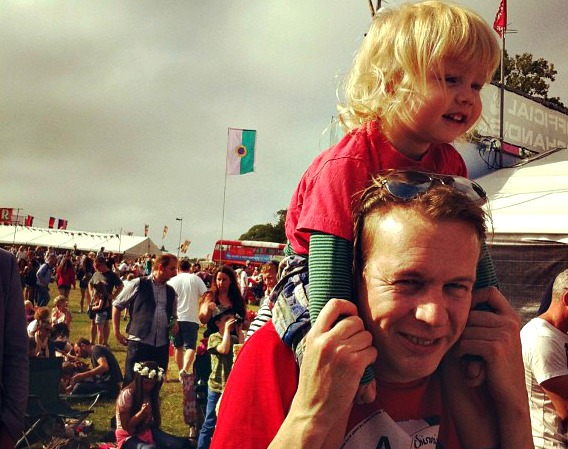 For us adults, much of the pleasure came from the kids faces, but a festival has to deliver for us too. And in lots of ways it did. The musical line-up is very varied, ensuring there should be something for all tastes. In an ideal world I would have liked there to be a little more to our taste, but there was enough to keep us satisfied. Most of the bands we wanted to see were on the Friday, and we had to make a special dash to be there in time to see Ash, who were on at 4.30 in the afternoon. They were brilliant, and Syd liked them too. 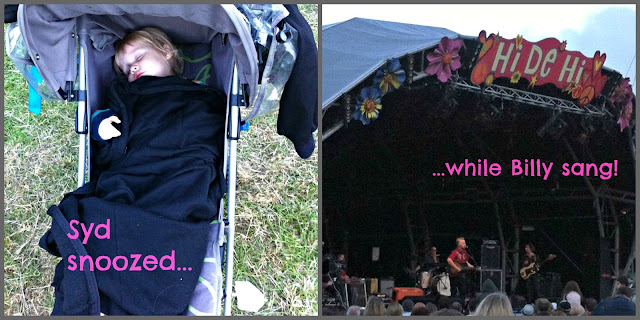 My special moment of the weekend was during Billy Bragg’s  set. He is one of my absolute heroes, Syd has fallen asleep in his pushchair, and I got to sing along, with my lovely man by my side, as the sun set behind the castle- a perfect moment which I will remember always. John Cooper Clarke was a legend, and we enjoyed the snippets of The Proclaimers that we heard while strolling around. 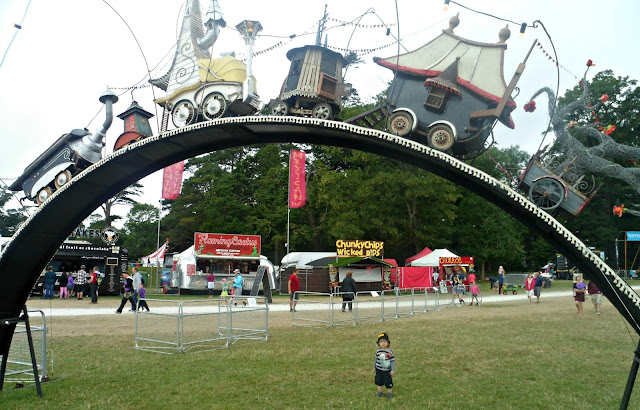 Saturdays highlight was watching Syd getting his total funk on to Grandmaster Flash’s DJ set. He LOVED it, and was shouting, singing, dancing, using his legs for percussion as the DJ veered from Nirvana to disco seamlessly. My boy loves his music. 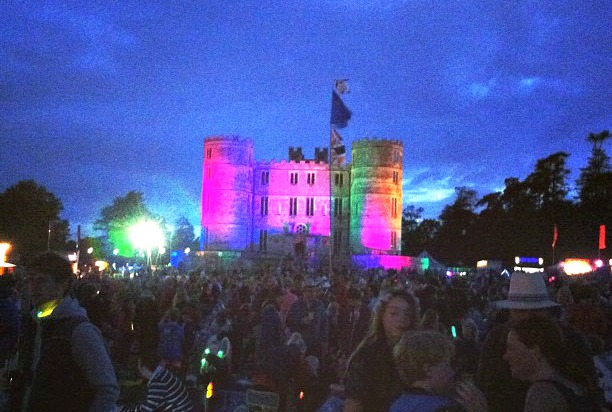 And all of the above took place in the most gorgeous of settings, surrounded by rolling hills, Lulworth Castle provides the perfect backdrop for the magic of Camp Bestival, and lit up at night it is even more beautiful

Onto the practical bits-.

Food- a whole range of prices and flavours- something for all palates, pockets and plenty of vegetarian choice.

Toilets- were festival toilets- sometimes a bit nasty if you caught them before an emptying. The compost loos dotted around were a much nicer experience, and there were little ones for small peeps.

Drinks- At just over the £4 mark a pint, it is not dissimilar to lots of pub prices, my other half would have liked a wider range of brown beers, but did find some tasty stuff in the bar in the Lower Kids Garden.

Campsites- were spacious, easy to navigate and close to the festival. Not too noisy, tho if you are sensitive to sound ear plugs will always be a good idea at a festival. You could hear the thud of music until about 2 am, then it all shuts down, and I wasn’t aware of any rowdiness on the campsite itself.

Price- Festivals these days are not cheap. However taking into account that under 10s are free, and you can stay Thursday to Monday, and all the entertainment involved, I would say it is not unreasonable for a break in the Summer Holidays, and way, WAY cooler than a more expensive stay at a traditional holiday camp at the same time of year!

I simply adored it. I read these glorious posts from Mammasaurus , Hello It’s Gemma and The Alexander Residence this morning and wanted to turn round and go back again. Next year I will be there without a doubt. Oh. And if you read my post about failing at camping, this time we WON, we even got the tent back in the bag at the end of the weekend…